Clutch maintenance is important. Over time, almost all of your car’s internal components will need to be replaced or repaired. However, by treating your car with care and carrying out maintenance on time, you can extend the life of your car’s engine, transmission and more.

In this post, we’ll look at one of the most troublesome components in many cars – the clutch. The way you drive and the amount of maintenance you perform have a significant effect on the performance and lifespan of your car’s clutch.

The more gently you apply your car’s clutch, the longer it will last and the less likely it is to start slipping.

How does the clutch work?

Every car with a manual transmission has a clutch, as well as some vehicles with an automatic or tiptronic transmission. Most automatic vehicles use a torque converter instead of a clutch, which requires a different level of maintenance.

Your car’s engine is constantly rotating whenever it’s turned on, even if your car is at a standstill. In order for your car’s engine to operate without its wheels turning, the clutch controls friction between the engine and the transmission.

The clutch contains a large friction disc that comes into contact with the engine’s flywheel. When you don’t press down on the clutch pedal, movement travels from the flywheel to the friction disc of the clutch, then onwards to the transmission.

Press down on the clutch pedal and the friction disc of the clutch is pulled away from the flywheel, allowing the car’s engine to keep rotating without transferring power to the transmission and onwards to the wheels.

Since the clutch plays such an important role in your car’s operation, it’s important to treat it carefully. Using your clutch gently can extend its use by as much as 20,000 miles, while treating it recklessly can cut its effective use in half. 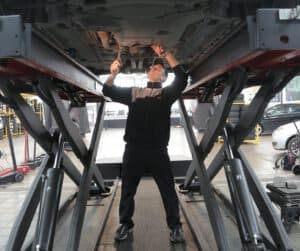 The clutch contains several components that are essential for normal operation of your vehicle. However, the most common source of clutch problems is the friction disc, which connects with the flywheel, and can wear out over time.

The purpose of the friction disc is simple – to transfer power from the engine to the gearbox. Think of it as a giant brake pad that connects with your engine to provide the friction required to transfer energy from the flywheel to the transmission.

Clutch slippage is a compounding problem. Since slipping increases the amount of friction between the clutch and the flywheel, the more you let your clutch slip, the worse the problem will become until the clutch is replaced.

Over time, even the most carefully applied clutch will become worn down, requiring replacement. Most modern cars have durable clutches that will last for 75,000 miles or more when used and maintained normally, making replacement rare but vital.

As one can see, this isn’t a job anyone can do! Fixingauto.com always recommends a professional do this for you!

If you use your vehicle to tow a heavy load such as a boat or caravan, there’s a good chance you’ll wear out its clutch earlier due to the increased amount of weight that’s placed on the friction disc.

Replacing a worn clutch is a big job that isn’t suitable for amateur mechanics. If your clutch is starting to slip and needs to be replaced, let a mechanic install a new one for you. This will costs between $300 and $1,500, depending on your car.

Over time, even the most carefully applied clutch will become worn down, requiring replacement. Most modern cars have durable clutches that will last for 75,000 miles or more when used and maintained normally, making replacement rare but vital.

How to reduce clutch wear

Your clutch only wears when it’s being engaged and disengaged. When it’s spinning at the same speed as the flywheel, wear is minimal. Likewise, when the clutch is fully disengaged, its friction disc doesn’t come in to contact with the flywheel at all.

This means that almost all of the wear your clutch will experience happens while it’s engaging or disengaging with the engine. When you apply the clutch pedal suddenly, it creates extra wear on the friction disc of the clutch, making it more likely to slip.

Engage and disengage the clutch pedal gently, however, and the clutch will slide into place up against the flywheel without any extra wear. Change gears carefully so that your clutch isn’t suddenly pressed against or pulled away from the flywheel.

It’s especially important to change into first gear carefully, since almost all serious clutch wear occurs in first gear. Keep your car’s engine spinning as slowly as you can without it stalling, then gently take pressure off the clutch pedal to start moving.

Excess weight, usually from a trailer, can also wear down your clutch over time. The clutch can also wear faster than normal if you frequently drive up and down hills or come to a standstill on a slope, forcing you to rev heavily in order to accelerate.

Like most other vehicle components, the key to extending your clutch’s lifespan and reducing the cost of repairs is treating it gently. Engage and disengage the clutch as smoothly as you can and you could double the amount of mileage you get from it.

Is your clutch in need of repair or replacement?

For most drivers, clutch problems are fairly uncommon. Most modern clutches are designed to tolerate more than 75,000 miles of driving without any issues, making clutch repairs and replacements a fairly rare expense for drivers.

The most serious problem for a clutch is slipping – a problem that’s easy for you to identify. However, other problems can occur that affect the way your clutch works and compromises your car’s performance.

From loosened cabling, which prevents your clutch from being controlled effectively by the clutch pedal, to a leaking clutch cylinder, problems with your clutch’s internal components can make it less effective than it should be.

If your car’s clutch stops performing as it should, begins to shudder or slip when it’s applied or simply makes too much noise when it’s in use, take your car to your local garage or the dealership immediately to have it looked at by a professional.

FixingAuto.com understands that you want to reach your destination using a vehicle that is safe, reliable, comfortable, stylish and stands out amongst the crowd. Our passion is helping you understand your vehicle better no matter what background knowledge you have. Let us be your support guide to your vehicle needs.